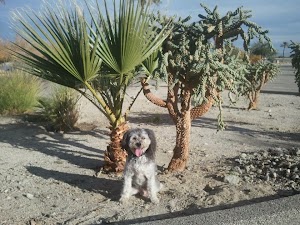 Marilyn Bojorquez
01:49 16 Apr 18
I can’t thank Dr. Jackman and his staff for all their help and support they gave us during the health issues in my beloved Bella. Throughout the 10 years we had her she brought smiles to the faces of many people. Because of her size my husband called her his “chick magnet “ The staff was always polite and professional and when it was time to say goodbye to Bella, not only were they supportive to her needs but mine as well! Thanks again for all you do for our animals.

Justin Case
23:07 24 Mar 18
Thank you to Dr. Emswiller for helping our puppy with a broken nail bed. We are in Palm Desert on vacation and we called 2 other vets who couldn’t get us in for 4 days. Desert Dunes got us in quickly even though we had no appointment. Very caring staff.

Denise Patterson
16:54 07 Mar 18
Had to take a friend's cat to this veterinarian. I did not have an appointment. My wait was very short, my service was outstanding. I was in and out within 1 1/2 hrs! Just being a walk-in, I expected to be there 1/2 the day. I was wrong, thank goodness.

Denise Sanchez
18:10 05 Sep 17
I have 2 dogs and unfortunately one of them has had skin and stomach issues since she was a baby. I had taken my dog to a few different vets in the valley and nobody was helpful. I have been going to desert dunes for about 2 years and I will never go anywhere else. Dr. Conner is an amazing doctor and human being! Every time I take my babies to him it's so clear that he genuinely cares, he takes his time and he always knows just what to do. I appreciate him so much. He is incomparable to so many other vets in the valley that I have gone to in the past come in the room rush through the visit, tell you there's nothing you can do and charge you. Thanks to Dr. Conner my dog finally lives a calm life unlike before when she would cry and scratch her skin all day. Thank you so much Dr. Conner for actually caring!

Gary Mergelkamp
02:16 27 Apr 18
Had to put a beloved pet down they were very inderstanding

Kara McCarty
18:36 06 Jul 18
Very nice and clean facility, everyone was super friendly, doctor was excellent only four stars cause it's a bit pricey...

Leah Shepherd
21:36 24 Dec 19
Only animal hospital in the desert that I trust! Taking your pet to the hospital can be a little overwhelming. The front staff were amazing to say the least and was able to answer a lot of my questions over the phone and scheduled me an appointment right away. Once I arrived I was greeted and felted at ease knowing that I was going to be taken care of. The doctors are all amazing and really care about your pets. I love how they take the time to explain everything to you and don’t mind if you ask additional questions for clarification. I was also happy to know how awesome the back staff is. They greeted my pet and made sure my animal was at ease prior to taking her to the back. I’ve been coming here for years and wouldn’t trust anywhere else!

gena esposito
00:10 19 Oct 19
I made a same day appointment because my dog had a swollen foot. We just moved to the area a few months ago, and been looking for a good Vet. I got there early and yet still waited in lobby for 15 minutes while people with later appointments were taken back. Then when finally taken to a room I waited 45 minutes before I had to go see if someone was going to see us. We had Dr. papas and We were never told hey he is running behind nothing. I had to go find someone. Then got oh I’ll see where he is!! Really horrible professionalism.Then I was charged for a full exam and an antibiotic. He saw my dog for 5 minutes and didn’t even know what the issue was. Gave me two options and then left. Never ever have I had this experience .We will not be back. My time is worth as much or more than his. If it weren’t that it was a Friday I would have left and gone elsewhere.

Megan Lester
23:46 08 Jan 20
I have taken my dog to Desert Dunes ever since he was a puppy and I have had nothing short of pleasant experience. Every time I go in it is always very clean and doesn't smell like other animal hospitals. The front desk staff is always very friendly, helpful and accommodating. The doctors and vet techs have always been warm, welcoming and knowledgable. I had my dog neutered by Dr. Howarth and he did an amazing job. He did such a great job you can't see any trace of a scar. I shopped around other veterinary hospitals in the area with previous dogs, but Desert Dunes is by far the best! If you are looking for a place that truly cares about your pet, this is the place to go.

Kara Inouye
18:12 15 Feb 20
I made an appointment but there was a slight wait time. They could provide more chairs in the reception area you don't have to sit so close together. The pets are stressed out enough without adding to it by having a dog owner sitting next to a cat owner.
See All Reviews Write a review

“We understand the special role your pet plays in your family and we are dedicated to being your partner in your pet’s healthcare. “

One day while Dr. Jackman was growing up on his family’s farm in Utah, one of their horses injured itself on a fence. Dr. Jackman was fascinated as the local veterinarian sedated the animal, cleaned and sutured the wounds, and nursed the horse back to health. From that moment on, he wanted to be a veterinarian himself.

As a vet, Dr. Jackman enjoys the variety of work he gets to perform – on any given day, he can be a dentist, dermatologist, or a surgeon. He has special interests in orthopedic surgery and ultrasonography. Most of all, Dr. Jackman enjoys meeting his wonderful clients and developing lasting relationships with them and their pets.

In his time away from the hospital he enjoys outdoor activities and taking trips to see the world with his wife Lori of 33 years, 3 married children, 3 grandchildren and now 3 grand dogs. They all enjoy their rescued dog Daizzy who they think is the best West Highland Terrier in the world, she really is that great.

Dr. Connor comes from a family of animal-care professions-his father and uncle were both veterinarians. Dr. Connor started working alongside them at their clinics and farms at a very young age and couldn’t help but fall in love with the profession. It didn’t take him long to decide that he wanted to become a veterinarian himself.

After starting his career in small and large-animal medicine, Dr. Connor moved to California in 1995, where he began working in the Southern California racetrack circuit. In 2007, he became the State Veterinarian at the Southern California tracks until joining Desert Dunes Animal Hospital in 2009. While Dr. Connor considers his years of working with horses very rewarding, he says that it doesn’t compare to the work he gets to do here at the hospital.

Dr. Connor and his wife, Kathy, have four grown children. They both enjoy golfing and on any given day, it’s a challenge that can either be disappointing or very rewarding.

Dr. Brockmeier always had pets while growing up in her family’s Santa Monica, California home. For as long as she can remember, she has wanted to give back to the animals who constantly showed her unconditional loyalty and love. She gets to do just that as an Associate Veterinarian here at Desert Dunes Animal Hospital with a special interest in avian medicine.

At home, Dr. Brockmeier has a bird of her own: Ophelia, the consummate cuddle bug. When she isn’t spending time with her own pets or caring for the area’s animals here at the clinic, Dr. Brockmeier enjoys snowboarding, reading and playing polo. She played polo throughout college and even won a few tournaments.

Among other specializations, Dr. Nicole Brockmeier is also an exotic bird veterinarian.

Dr. Papas graduated from The Ohio State University’s College of Veterinary Medicine in 1973. During his senior year, he was President of the Student American Veterinary Medical Association. His undergraduate studies in the Liberal Arts College at Bowling Green State University of Ohio resulted in a Bachelor of Science (B.S.) degree in Biology and Chemistry, in 1969. He is originally from Canton, Ohio and grew up in a family that was very pet oriented. To this day, his mother still has a Dachshund.

Dr. Papas, while in veterinary school, had the privilege of being the curator for the City of Columbus traveling zoo, during the summer after his second year of study. He was associated with the Columbus Zoo and gleaned much experience, in an area of veterinary medicine that was in its infancy. He pursued zoo and equine practice, as an avocation during the formative years of the companion animal practice that he founded in the same year of his graduation. He has mentored many pre-veterinary and veterinary students, as part of the curriculum of Ohio State’s veterinary medical program.

Eventually the demands of a companion animal practice caused him to limit practice to dogs and cats. Dr. Papas immensely enjoys all facets of veterinary medicine. The human-animal bond is something that he firmly believes is precious. His goal is to understand the client’s concerns and provide the best care available for their pet(s).

As an aside, Dr. Papas and his wife, Mary, trained their German Shepherd Dogs and Shar Pei then competed in obedience, tracking and agility trials. Both were also certified evaluators for Delta Society, determining an animal and handler’s suitability for therapy animal visitations in hospitals, etc. Mary, Dr. Papas’ wife, was the first to have a Chinese Shar Pei (Joss Kiwi) earn the American Kennel Club’s Utility Dog (UD) title, as well as the Canadian Obedience Trail Champion (OTCH) title for that breed. These are the highest obedience titles in their respective countries.

In 2012, Dr. Papas sold his now multi-doctor practice and became a fulltime Coachella Valley resident, after having owned a home here since 2003. Dr. Papas looks forward to providing quality care for your pet at Desert Dunes Animal Hospital.

Growing up in Nebraska and Northwestern Arkansas Dr. Howarth was always nursing sick or injured animals back to health. He decided at the age of 12 that he would become a veterinarian. In June of this year he has been serving the pets of Southern California for 50 years.

Dr. Howarth has a special interest in surgery, and especially enjoys that he can make a big difference in a pet’s well-being very quickly. He’s also fond of emergency medicine and the challenge it brings.

Dr. Howarth recently was married. He and his wife Cheryl enjoy staying active by hiking, riding motorcycles, wave runners and traveling. He also lives with his dog Bill. He has 3 children, 3 stepchildren and a pair of grandchildren.

Dr. Juarez is a San Diego Native. She received her Veterinary Degree from The Autonomous University of Baja California in Mexico, then obtained her American Veterinary License through the Educational Commission of Foreign Veterinary Graduates through the AVMA. She has had over 15 years in The Veterinary Field.

She has a passion for ophthalmology, lameness, internal medicine and is currently working on a degree in Veterinary Acupuncture.

In her free time, she enjoys horse back riding, kayaking and quality time with her fur babies.